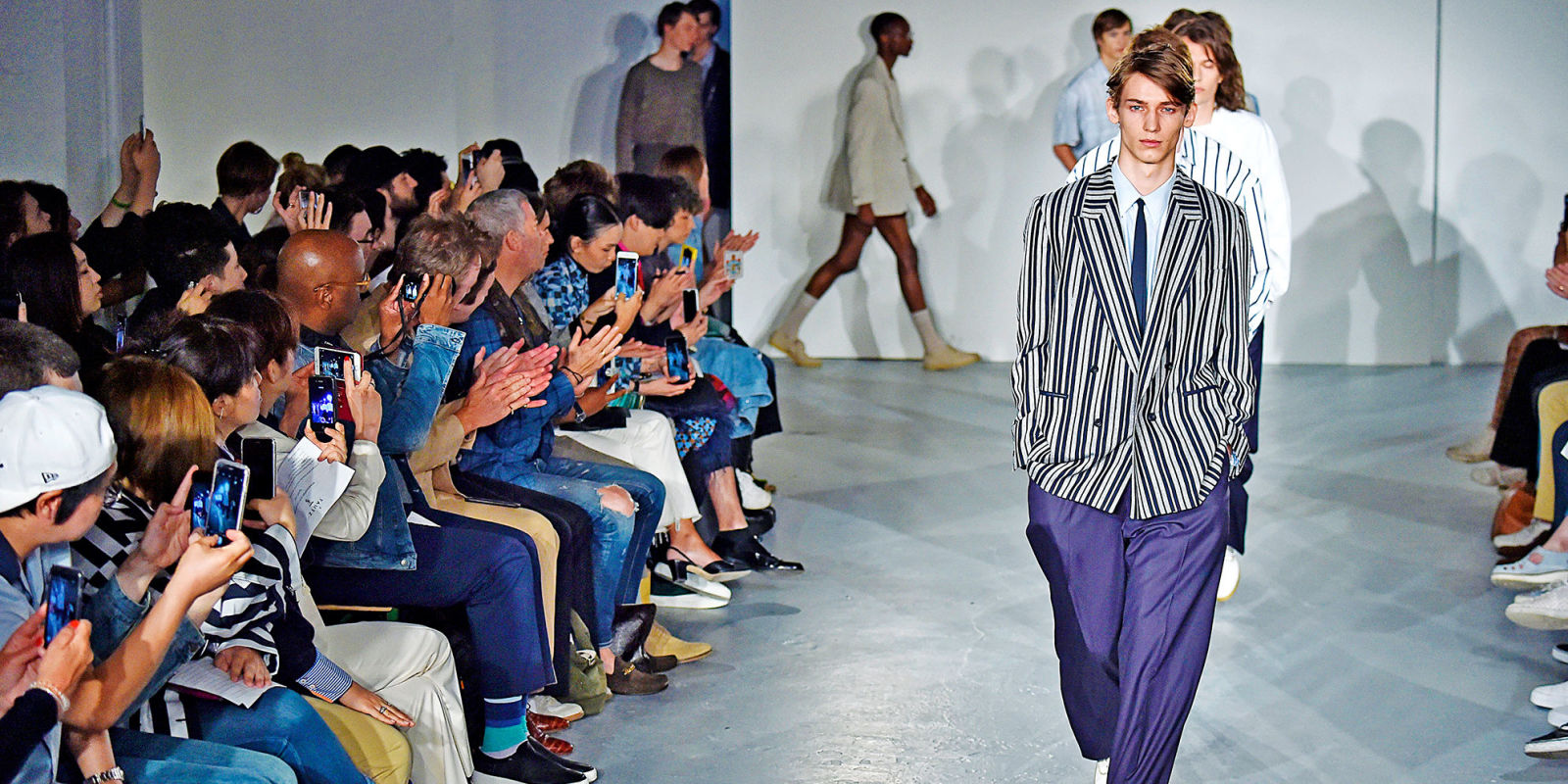 Fashion, by its very nature, is a cyclical beast. And twice a year, the international menswear literati flit between the world’s style capitals to sit in glaringly bright rooms reverberating with unnervingly loud music to watch square-jawed models saunter down the runway. This is, of course, all in the name of Fashion Week. London kicks off this biannual style fiesta with a four-day showcase, which seems quite appropriate, seeing as the British capital is often cited as the world’s oldest menswear hub.

At Esquire, we know you’re just as keen as we are to find out what’s in store for our future wardrobes, so here are our key takeaways and trends from the SS18 London shows—although don’t blame us if this article considerably lengthens your sartorial wish list.

Timeless Style Lives on in London 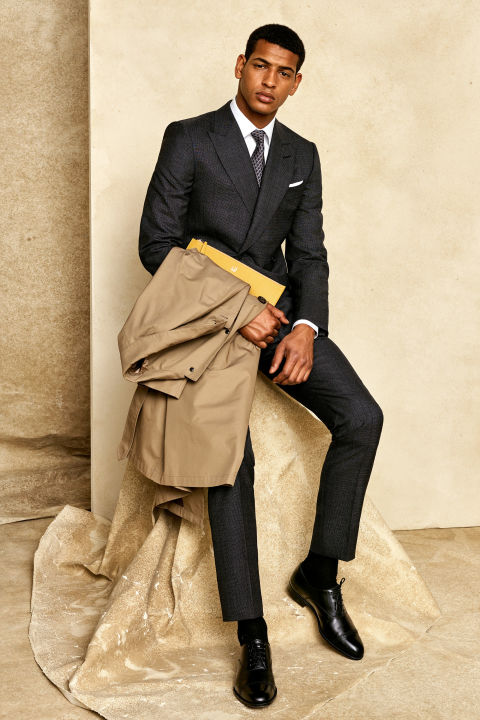 Founded in 1893, Dunhill is one of the most quintessentially British brands and proved that London is the home to an aesthetic that transcends seasonal shifts in taste, with its stellar offering of plush city tailoring, relaxed yet refined casual separates and luxurious summer suedes. “London has a sartorial heritage steeped in tradition – it displays a refined elegance which the British are famed for the world over”, says Dunhill’s newly appointed Creative Director, Mark Weston – and we would be inclined to agree. 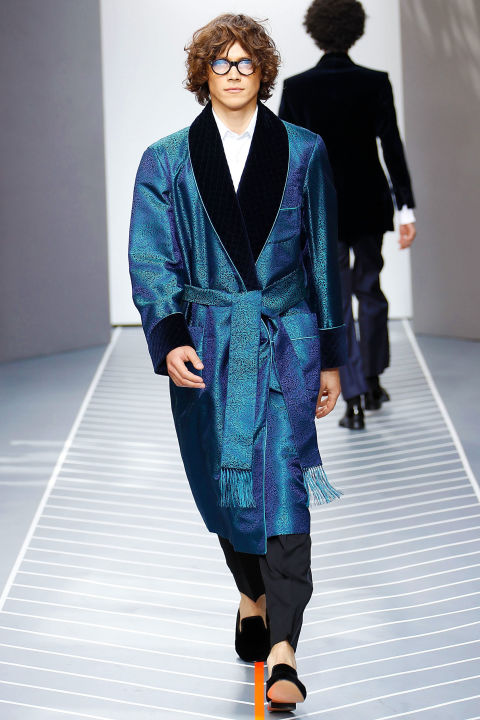 In business since 1865, New & Lingwood also proved its worth at the St. James’s runway show, with a beautifully cut olive safari jacket and a louche English silk paisley dressing gown—a must for any aspiring rake. “Much of what we see in collections around the world has its origins in the craft of fine British tailoring, shirt making, and shoemaking,” says Simon Maloney, the brand’s Product and Marketing Director. 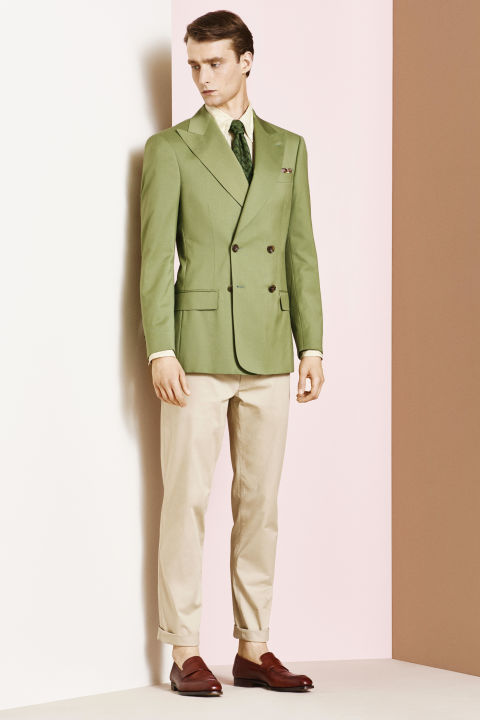 With such emphasis on heritage, London could risk being stuck in its ways, but contemporary tailor Richard James turns this notion on its head. The SS18 offering, entitled “Atlantic,” took its cues from the bold work of U.S. artist Ellsworth Kelly and highlights the brand’s inventive use of fresh, summery hues and premium cloths.

“We’re a tailoring business, but we’ve always had a very modern attitude. We respect the heritage and traditions of Savile Row, but we have a more contemporary vision with our use of fabric and color,” says the brand’s Creative Director, Toby Lamb. Our favorite piece? We think this pistachio-green double-breasted jacket is right on the money. 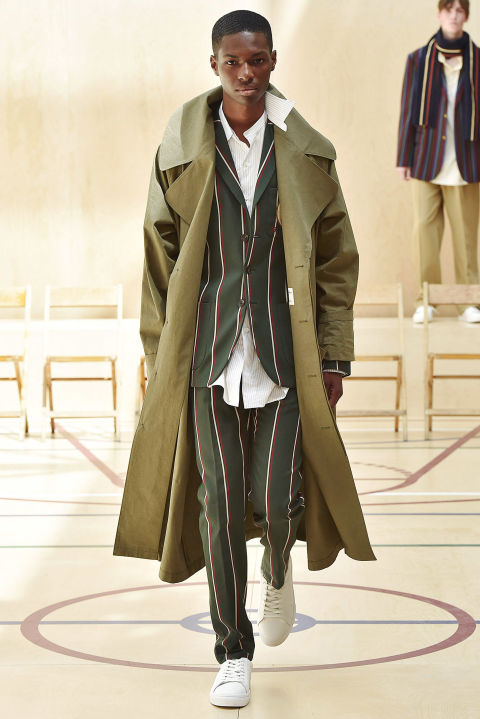 Kent & Curwen, which has style icon David Beckham on board as a creative partner, put on a display of team spirit for its SS18 collection. Creative Director Daniel Kearns took inspiration from a range of archive sporting attire, including 1920s cricket apparel, Olympic uniforms from the 1948 austerity games, and the vintage college blazers of Oxford and Cambridge athletic teams. The resulting collection was a preppy, sporty, hybrid mix of English panache and casual elegance, which proved to be a winning formula. 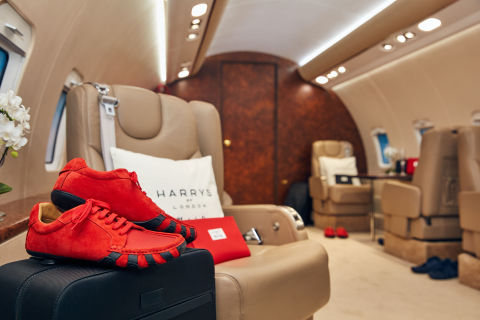 Air travel today is an obstacle course of endless security checks and harassment that makes you wish you’d stayed at home. Luckily, for SS18, Harrys of London devised a way to make the experience slightly less agonizing by developing a line of footwear that won’t trigger scanners at the airport—the idea being that you won’t have the inconvenience of removing your shoes.

“We make really beautiful designs, but at the bottom of everything is our innovation and unique technology. We aim to be one step ahead all of the time,” says Harrys of London CEO Steven Newey. The “Made to Fly” collection features an extensive range of Italian-made loafers, sleek monk straps, and eye-catching printed sneakers, alongside a slick range of leather luggage. 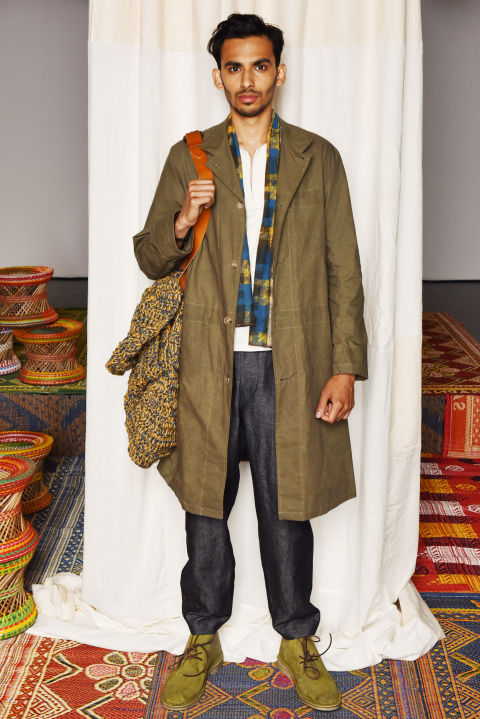 Rising menswear star Nicholas Daley’s latest line, “Madras,” is a testament to the melting pot of London’s cosmopolitan society and draws on the designer’s fascination with multiculturalism. “Britain has had such a broad cultural exchange, which is why it’s always been a bit more forward thinking, due to this dialogue of different communities–that’s what I love referencing in my work,” says Daley.

An amalgam of Indian and Scottish elements, the collection was inspired by extensive research sessions spent poring over 150-year-old Madras cloths at a world-famous fashion archive in London. The resulting line of bold tartans, hand-made crochet accessories, and jodhpur trousers offers something with a distinctly exotic air. 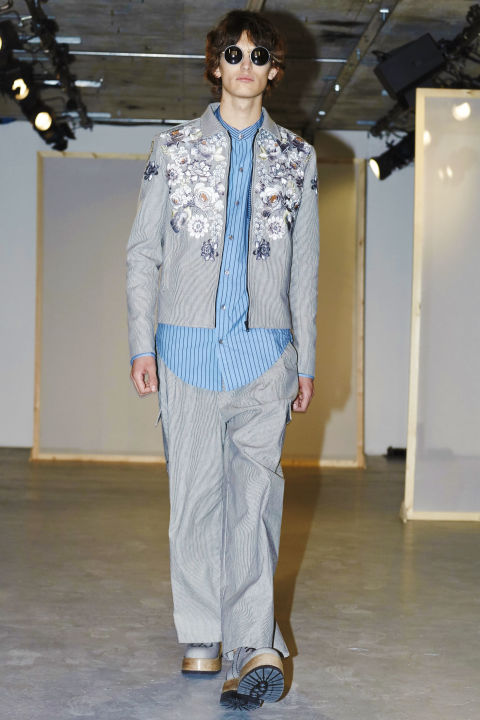 They say that fashion is a barometer for the political climate, and there was a raft of shows that drew on the current feeling of looming uncertainty, including Liam Hodges, E. Tautz, and most notably, BODYBOUND. Entitled “We Shall Not Wilt,” the collection focused on the flower as a symbol of rebellion in a strong statement against war and strife. References to junta violence and civil unrest were juxtaposed against a delicate daisy-chain barbed-wire motif, intricate floral embroidery, and peace signs, which on the centenary of the First World War had a strong resonance. 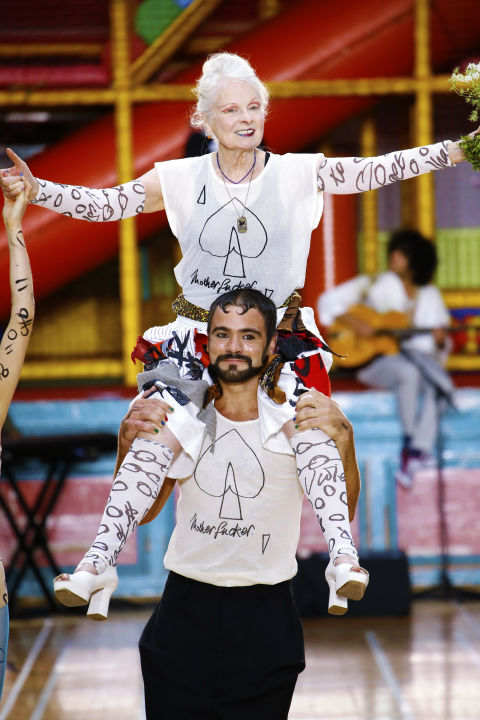 The original enfant terrible of fashion, Dame Vivienne Westwood is, at 71, still taking her distinctly alternative approach to design in an industry that can be rather too serious at times. Her latest collection, entitled “We Are Motherfucker,” is a two-fingered salute to greed, propaganda, war, and the oppression of the establishment.

Set against a backdrop of performing acrobats, the show featured the veteran designer’s trademark idiosyncratic cuts and complex fabric treatments. A suit featuring an overblown Madras check caught our eye, along with Dame Vivienne herself, who rode down the catwalk on the shoulders of a male acrobat. 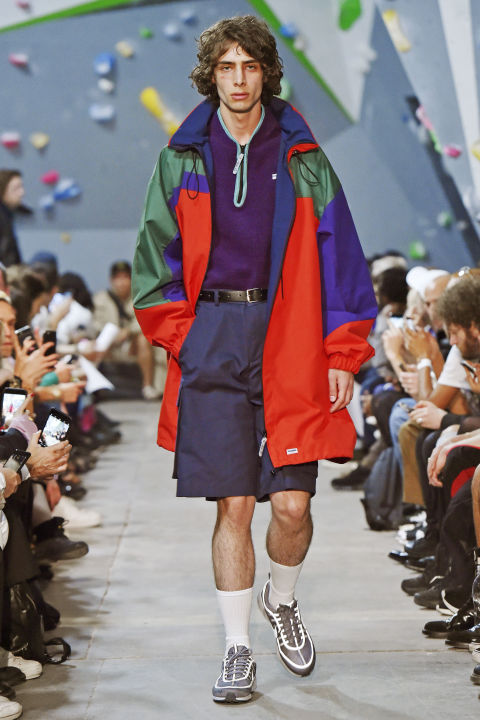 It’s no longer geeky to be an anorak-clad rambler, says Martine Rose. Or maybe it is—but now it’s also cool. Either way, we’re pretty taken with the designer’s collection that referenced sporty, outdoorsy types, which appropriately was shown in a climbing center in north London. 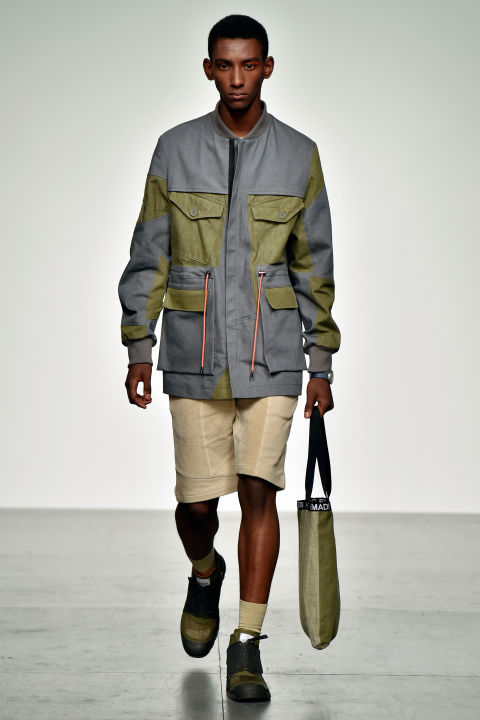 Also referencing the spirit of the great outdoors was Christopher Raeburn, who remains the undisputed master of military cool. His assortment of oversized parkas, field jackets, and ultra-modern sportswear was inspired by The Long Walk, which details the experiences of Slavomir Rawicz; a Polish Army lieutenant who trekked 4,000 miles from Siberia to British India during World War II after escaping from a Russian internment camp. Incarceration and conflict aside, what man doesn’t need a bit of camo in his life?