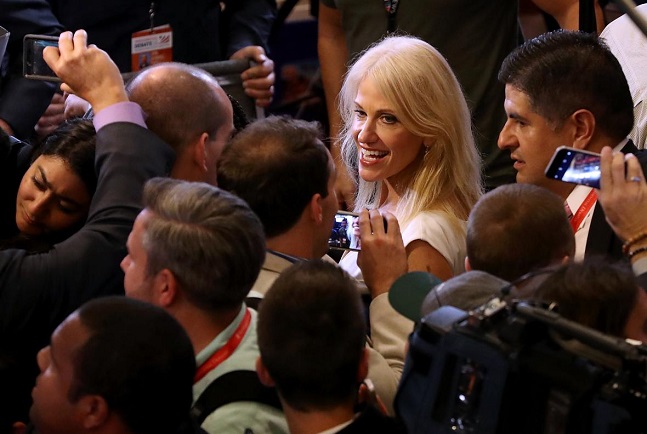 Kellyanne Conway recently became the first woman to successfully lead a winning presidential campaign. It’s not the first time she’s been a ground-breaker: Conway started her polling company in 1995 when she was just twenty-eight years old. In different circumstances, she’d be feminist favorite and heralded as a role model. Yet because she’s an unapologetic conservative—and even worse, one that helped elect Donald Trump—she’s reviled by the Left, and a target for vicious attacks.

Conway’s latest sin is her candid remarks about why she decided not to accept a top White House job. According to Politico, here’s how Conway described explaining her decision to male colleagues:

I do politely mention to them the question isn’t would you take the job, the male sitting across from me who’s going to take a big job in the White House. The question is would you want your wife to . . . Would you want the mother of your children to? You really see their entire visage change. It’s like, oh, no, they wouldn’t want their wife to take that job.

Donald Trump’s former campaign manager Kellyanne Conway said that mothers should not accept high-powered career opportunities—a standard that does not apply to fathers, in Conway’s opinion . . .

The problem with Conway’s remarks is not the value of her family or spending time with her children. She seems to believe that it is a woman’s responsibility to sacrifice her career opportunities in a family so her husband might. More troublesome is that Conway means that there is no good mother should bear such a work attitude, feeling madman pulled down.

Yet that’s not what Conway said at all, and it would be bizarre if she did offer such sweeping pronouncements about what constitutes a good mother. After all, Kellyanne has been running a major polling company the entire time she’s been a parent. She’s just spent the last several months leading a round-the-clock presidential campaign. This is hardly June Cleaver lecturing other women not to lean in.

Rather, what Conway dared to do was to describe honestly how most married couples approach major work-life decisions without the politically correct caveats that the Left wants people to use. If that had been her style, she might have added: “Of course, there are women who would jump at the chance for a West Wing job and they could still be wonderful mothers, and there are some husbands who would happily cheer them on. That’s great for them!” Or, “Certainly plenty of women, upon hearing that their partners are considering such a time-consuming job, would forcefully object. Men have balancing acts too!”

But she was not in trouble. She talks about her own experiences and her parents’ desires, and she knows how many women have such a decision. We can endlessly argue why women disproportionately take on major educational roles if it is congenital or acquired or some combination of uppercase and lowercase letters, and how it may change. However, for today’s reality, Conway simply makes sense and frankly takes it.

But Jarrett isn’t the only woman who’s had something to say about the experience of balancing work and family life while working in an Administration, even under a supposedly in-tune-to-women’s-needs boss like President Obama. Anne Marie Slaughter, who had been the director of policy planning at the State Department, wrote “Why Women Still Can’t Have It All” in The Atlantic after quitting her job because she felt she had lost too much time with her sons. Slaughter wrote that she’d been told, “You can’t say that!” when she described her plans to write the article, but she did write it. Naturally, Slaughter (a liberal feminist in good standing!) was mostly applauded for her piece, especially since she intoned about how the work world should change to make it easier for parents (but particularly women) to balance powerful jobs and family life.

Conway acknowledges that such a requirement is not easy to change the position, even when people are committed to helping working women balance their work and family life, Conway said, elected president. She also knows she will play for the next four years, but the wait is to ensure that any position she accepts meets the goals, professional and private. Good for her. She is not discouraging other women from pursuing their dreams, and she demonstrates that a strong woman has no solution and can shape the life she wants. This is not what feminism should be?