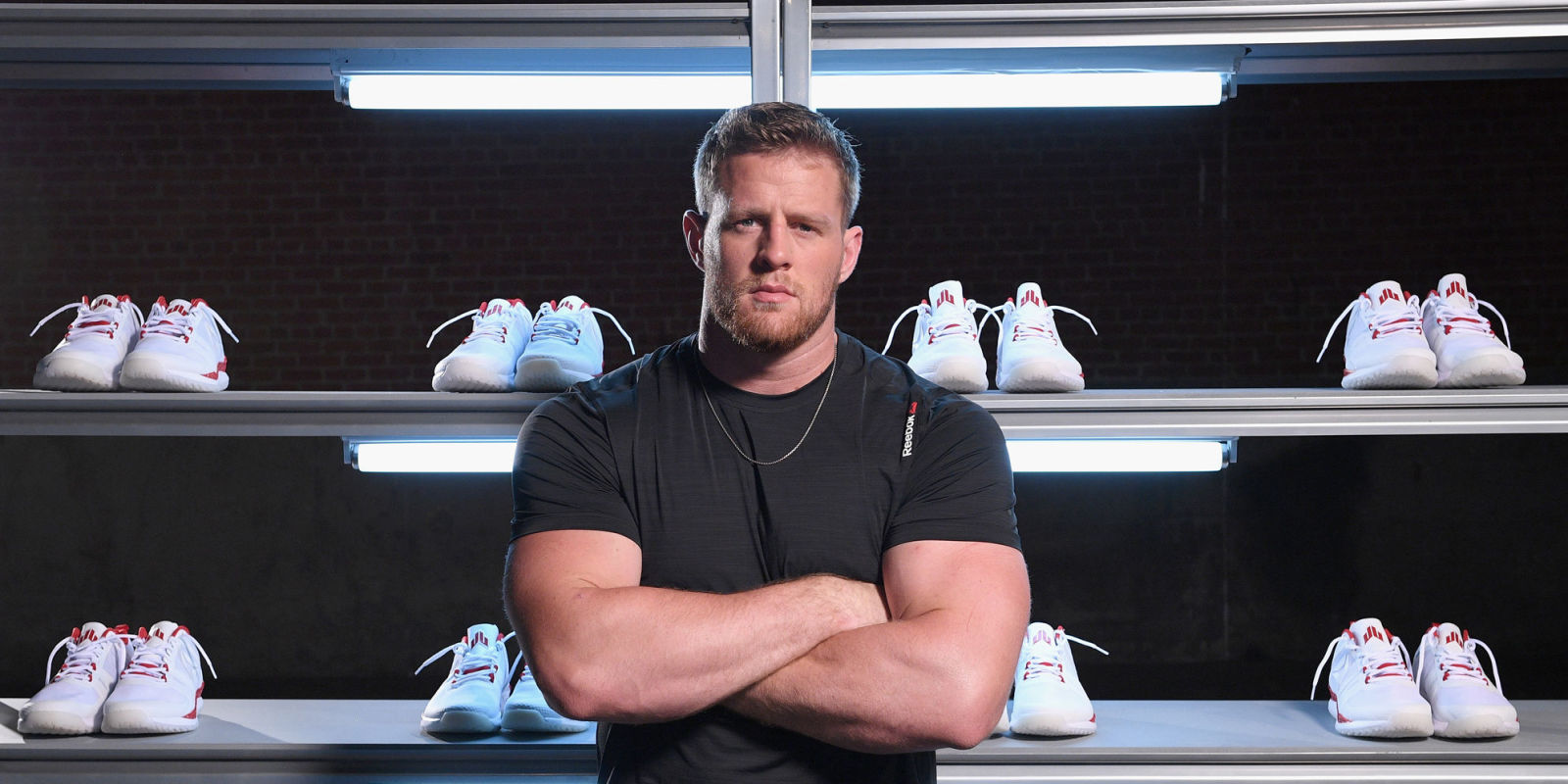 He’s checking to make sure I didn’t hurt myself working out with three-time NFL Defensive Player of the Year J.J. Watt.  I’m standing with Judson Vancor, Reebok’s director of training footwear, in a small warehouse in the Chelsea neighborhood of New York.

The last time I worked out with Reebok I ended up laying myself out in bed for the next two days. This time I took it easier—mostly. “I saw you sprinting with the sled,” Vancor said. “Don’t push yourself too far.”

We’re testing J.J.’s new sneaker, the JJ Trainer, which was just revealed and is set to release July 15. Vancor really didn’t want me to hurt myself, not because it would be unsavory press but because Reebok’s whole message is about being a responsible athlete. While circuit training with the NFL star, we were shown Watt’s personal records in each of the exercises we did, but not because we were reaching for his goals; instead the brand was trying to help us achieve our own.

It was just a few years ago that Kanye West went from Nike to Adidas, stating that one of his reasons was a desire for more control over his projects. Watt cites the same search for freedom as the reason he wound up working with to Reebok. Earlier that morning Watt and Vancor traded allusions and direct references to the many internal arguments that led to the final design of the shoe, both inside and out.

But signature sneakers don’t have to be argued over. Often a brand will set up a designer to create the shoe almost exclusively without the input of the player, who is then contractually obligated stamp his name on it. Watt wasn’t willing do to that. So the fights continued. They had to find something that would make everyone happy.

What makes Reebok unique in the sneaker world is its focus on creating a space where fitness is at the heart of any endeavor. Vancor told me, “When Adidas bought us five years ago they said, ‘Sport is our thing; you’ve got to do something else.'” Now, Reebok is filling the space between high-level performance and everything else, and making products for folks who can’t join a team or don’t have access to a court or field.

Watt is one of the best athletes in the world, but he wanted to make sure that whatever shoe Reebok made for him would also work for everyone else. “It’s parents who go home after work and go to the gym. It’s people who are going to the gym in the morning before the office. It’s everybody. Anybody’s an athlete,” says Watt. “So I wanted to create something that could help anybody in any situation.”

There’s a poisonous lie that pervades most signature athletic shoes: If you wear this shoe, you’re going to be like the athlete whose name is on it. It’s great for marketing, but it’s false—dangerously so. Wearing a pair of LeBron’s shoes isn’t going to make you play better or jump higher, and that can make simply being yourself feel like failure. Not only does it make us strive for things that are improbable, it sets a huge percentage of customers up for disappointment. So many of us cannot physically reach the same goals as Steph Curry, so why pretend a pair of shoes will fill an un-fillable abyss?

Watt is not trying to get anyone to be like him. He just wanted to make something that would support anybody. He wanted to make the best training shoe in the world.

One of the words that Watt used frequently when talking about the shoe was “safe.” It was designed to make the wearer feel more secure. Athletes rarely talk about engendering a feeling of safety in their training, but it’s a sentiment that is crucial and native to Reebok’s movement. Again, this is a shoe that a mom could throw on to do her workout when she has time.

Anybody’s an athlete,” says Watt. “So I wanted to create something that could help anybody in any situation.”

If you’re not 6’5″ and 290 pounds of solid muscle, it’s hard to know what your physical limits are, especially if you’re not at the prime of your athletic abilities. So if you want to jump to that high box or hit that 20-yard sprint as hard as possible, you have to feel like your equipment is going to be there for you when you need it. That’s what the JJ Trainer is trying to do: give you the space to feel comfortable and supported so you can find your boundaries and push them. This shoe is getting out of your way until you need it.

I don’t know if it’s the best training shoe in the world, but what I do know is that it’s very responsive to cross training. We ran sprints, did box jump, pushed weighted sleds, and flipped tires. Watt and Reebok wanted to create a sneaker that felt safe, and they have. I was able to push myself in each one of these exercises: sprinting faster and taking a hard pivot, pushing and pulling the sled faster, jumping and landing softer, all without worrying if the sneakers were going to let me down. They were performing fresh out of the box.

The shoes were there to give me what I needed and little more. As someone who didn’t follow a path into professional sports, I’m happy to hear a message that’s more inclusive than earning championships, or scoring more points, or even doing more everyday. It’s about the vision.

“If you don’t have that vision for the end goal, you have no clue where you’re going and you’re going to work very hard to go nowhere,” Watt says. This can be applied to anything, sports or life. So I’m going to take my rest day because that’s a part of my vision for myself. But when I’m ready for the next round, I know the shoes will be there.

Reebok’s JJ Trainers will be available from Reebok and other retailers on July 15 for $99.