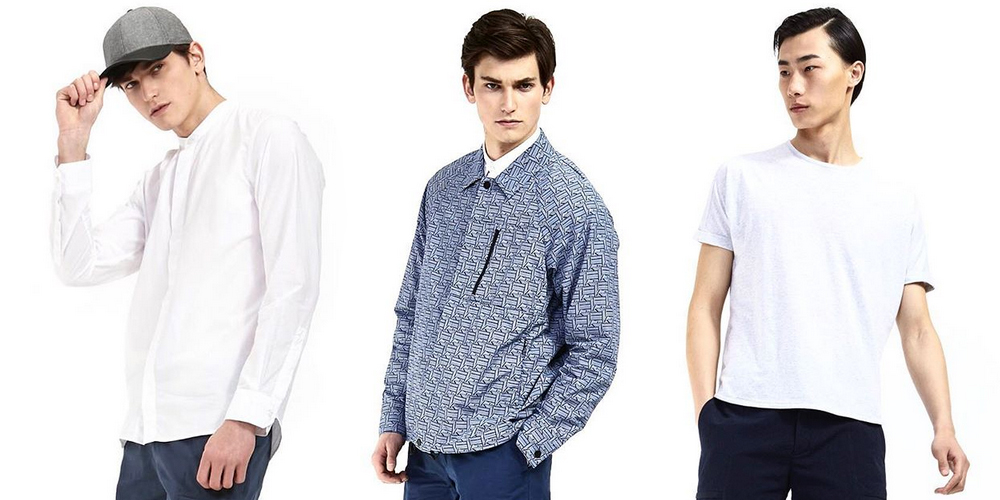 It’s no wonder that many architects dabble in fashion. Take NYC-based designer Luis Fernandez: He spent his days sketching modern skyscrapers at major architecture firms and his nights exploring the more intimate applications of structural design. Fashion and architecture have a simple common denominator: structure.

Eventually, Fernandez quit his job in architecture to focus on fashion full-time. His first line, NUMBER:Lab, began as an urge to create the optimal T-shirt and evolved into a full-fledged menswear line (one of the first to explore the haute athletic space we now call athleisure). Today, Fernandez is at the creative helm of Craft Atlantic, a modern American take on upscale menswear with a dose of inspiration from East Coast nautical style.

10 Trends You Need to Know from NY Fashion Week

Flexing his architecture chops, Fernandez and his team opened up a brick-and-mortar store in New York to fully realize the brand as an experience. We caught up with the designer to talk construction, inspiration, and the role of technology in fashion.

Esquire.com: What’s the plan for NYFW this year?

Luis Fernandez: We’ve taken a slightly different approach this season. We’re doing more private appointments in the store to show the collection in a much more intimate way. Then we’re possibly doing a more consumer-facing event for Spring ’17 in February, when the product is already in stores. We’re still showing it to the buyers and editors, but we’re not releasing it out to the public until it’s in stores and ready to purchase.

What inspired you to do things this way?

I think it has to do with the schedule at which clothes are arriving at stores. Ultimately it’s affected by how the consumer shops today. It’s much more immediate. It’s this feeling of, I want this now. Rather than pre-shopping months in advance, then ordering your winter jacket a few months before the season, consumers want things now. The fashion industry is responding to that in some way and trying to align the calendar with how the consumer is feeling.

We’re an immediate gratification society, or at least we’re moving towards that. [Laughs]

How did you find your way into fashion?

I studied architecture at Cornell. After I graduated, I came to New York and worked at a couple of big firms doing skyscrapers—glass, steel type of architecture—always extremely modern. I eventually started a T-shirt project and also started working at a small studio in the West Village that did fashion retail. We were working on Barneys, Nautica, and a ton of different stores. It [taught] me the business, consumer aspect of the industry, and I was able to pair that with the design and creative side.

Back in 2008, I quit my day job and started working full-time on my clothing line, which back then was called NUMBER:Lab. It was one of the first that was dealing with what’s now called athleisure. For me, it was more of just the same philosophy of my architecture background, which was about form, function, and those notions of the functionality informing what it looks like—filtered into the fashion.

The Craft Atlantic retail store now makes even more sense. What was the aim there?

Thinking of the brand as a full experience was a big part of it, especially with my architecture background. The environment and the space of the brand are just as important as the clothing itself. If you look around at modern-day fashion culture, so much of it is about the experience. To be able to create the store and the collection at the same time was an amazing experience.

Architecture and fashion don’t seem immediately linked, but there is a lot of crossover, like you mentioned with NUMBER:Lab. Are architecture design principles part of Craft Atlantic?

For sure. I think it’s part of my personal design ethos—what I call “tech-tailored.” For me, it’s the fashion version of form and function. It’s the notion that function and what it looks like need to be super tied together. If you think about it, that’s what athleisure is. It’s responded a little bit to how we live life differently now than we did in the past—and how clothes respond to that. When you add into those technology advancements in terms of fabrics and waterproofing and breathability, that’s when you get “tech-tailored.”

A lot of your pieces carry these technical details, but they’re not blatantly technical garments.

That’s what I call the 2.0 of my design career. With NUMBER:Lab, it was very tech-y and athletic. We were operating in a world back then when everything was about American Heritage with plaids and tweeds—a very Ralph Lauren world.

With Craft, I’ve taken that to the next level. We’re at a point with the technology where we can take a natural material and work with it to make it technical and functional, but not look it. Consider this: You remember when our vision of the future decades ago was really Space Odyssey-like? As we’re actually getting into that future, the world still looks similar in some ways to back when we created those notions. Just because something is super tech-y and super functional doesn’t mean it needs to look that way. To me, that’s the beauty of technical advancement and innovation.

We don’t want, or need, to look like robots, essentially.

I think that’s finally become a conversation. It’s even more prevalent thanks to the Met Museum’s exhibit “Manus x Machinus.” At the Met Gala, it brought to attention what people thought was futuristic or technological. Some people went with the costumier version of a robot, and then there were the outfits that were more thoughtful in terms of how they were made using technology. That’s the 3.0 of tech and fashion: The way that we make clothes becomes extremely technical, but we arrive at something that isn’t alien or super foreign.

How is this idea manifesting in the next Craft Atlantic line?

You take fabrics that—again, through technology and innovation—can be super light and thin, but then still have the structure and rigidity and permanence of a fabric that’s otherwise thick and heavy.

You’re on the move, you’re going to a lot of places, so you don’t need or want clothes that are heavy and that weigh you down. That was a necessity back then, because the technology didn’t exist. If you needed something warm, it had to be heavy. Now we have technology that can thin down a material and still [retain] warmth and all the properties you need from it.

“Just because something is super tech-y and super functional doesn’t mean it needs to look that way. To me, that’s the beauty of technical advancement and innovation.”

This sort of versatility is a common theme in modern menswear.

I think modern American style is the ability to be everywhere at the same time. That has informed so much of modern-day life, where you can be anywhere in the world and still work and still be connected with everybody else. For me, that’s a huge part of what has informed how we dress. You don’t have to wear a three-piece tailored suit to go to work anymore because you may not be going to an office. You might be at home working or at a café. So much of that has informed our wardrobe.

I definitely love a uniform. I also love navy, which is no big surprise to anyone at this point. Even though it is a uniform, you can get so many different shades of navy or blue. The possibilities are endless, just in terms of how you combine them or layer them. I’m very much for that look, then offsetting it with a vintage watch, and lately I’m obsessed with sneakers and shoes. Either the technical, modern, hybrid sneakers or sandals that originated from the Teva style. I’m actually wearing this Japanese brand today, Suicoke. They’re finally starting to have a presence in the states. I was just in Tokyo; they’re everywhere there.

Travel is a big part of the Craft Atlantic brand. Do you find a lot of inspiration on trips?

I do. I’m always traveling, and I used to travel a lot for work as an architect. So that’s where the function part starts to come into play. You start to need things that are comfortable and that can last you through extended periods of different activities. Then you throw in the fact that you still do want to look presentable or polished.

It’s that duality of having to look put-together, but also being functional. Travel originally was a big part of Craft Atlantic, and as the brand evolves, the take-home is that you are traveling constantly. Whether it’s within the city or not, that notion of movement is what’s really the important part.