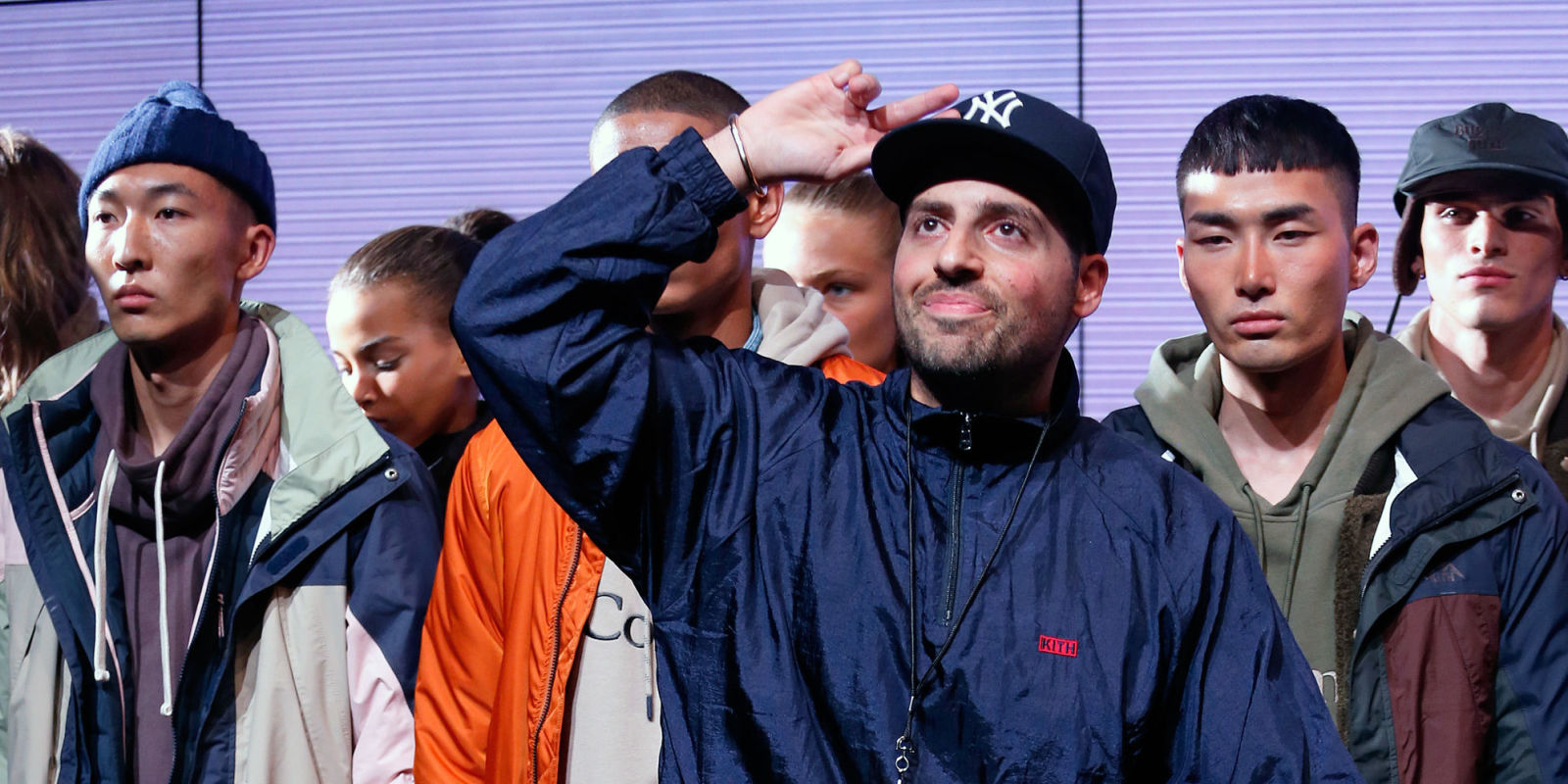 The CEO and founder of New York-based brand Kith, Ronnie Fieg, said “The first day of seventh grade, I’ll never forget it: I had a long-sleeve white Tommy Hilfiger rugby,”.

“I bought it two months before school started and I would stare at it every day—waiting, counting down to when I could wear that shirt. It’s that feeling that I miss so much and it’s that feeling that I want kids to have when they are able to buy that product. I want that feeling back.” And on Tuesday night, in a presentation dubbed Kithland, Fieg aimed to do just that, debuting 90 looks to a front row packed with everyone from Bella Hadid and Teyana Taylor to Victor Cruz, Ja Rule, Rick Ross, and A-Track.

Since debuting its first pair of joggers back in 2012, Kith has been at the leading edge of a new breed of brands that defy the graphic-based traditions of the streetwear they’re typically categorized with. “What Ronnie has always done really well is that he’s always been good on timing,” WGSN men’s trend forecaster (and Esquire contributor) Jian DeLeon says. “So when he launched his jogger, he was really in that moment where the market was ready for it.”

The advent of the jogger’s popularity signaled a shift in sneaker culture (at least among the young guns). Sneakerheads began to take just as much interest in their clothes as their kicks. And having already built up an impressive body of work by collaborating on sneaker designs with various brands, it was only right that Fieg be at the forefront of the movement.

He got his start early, at 13, working in the stockroom of his cousin’s sneaker store. By 25, Fieg was dropping his own sneaker collaborations. The first one was with Asics, in 2007. It sold out in a day. Last December, he celebrated his ongoing relationship with the brand at Art Basel in Miami. It was the 25th anniversary of the Gel-LYTE III, a sneaker that Fieg himself has worked on 25 different times. They launched a new style and Fieg released his first book.

But Asics isn’t the only brand Ronnie has worked with—by far.

At Kithland, collaborations with a whopping 25 brands were debuted. “We’ve done a lot this year,” Fieg says after recapping this summer’s projects. A brief accounting of those: a six-month pop up shop with Nike; a project in Paris with the high-end retailer Colette that used rapper Fabolous as the face; and pop-up shops with the Mets and Yankees.

Kith and Colette Are Teaming Up

“We have so much happening between now and the end of the year that we needed one place to show it all.” In practice that meant showing a collection of hoodies and tees that contained ’90s-style nods to cartoons via collaborations with Nickelodeon’s Rugrats, Power Rangers, and even Bugs Bunny, as well as new boot styles done in collaboration with Timberland and a sneaker style in partnership with A Bathing Ape dubbed the Fiegsta, an evolution of the brand’s signature Bapesta. That style will be available for purchase this weekend. Off White, Fear of God, Nike, Adidas, New Balance, New Era, Iro; the list of collaborators goes on.

Of the collaborations, the largest was with Samsung, which owns the Samsung 837 space where the event was held. “We’re there to launch our partnership with Samsung and leverage the technologies they have in the space to really showcase the collection as best as possible,” Fieg says. Spanning three floors, the venue hosted a Kith-branded virtual reality tunnel as well as a 360-degree selfie station and a cereal bar—the latter nodding to Fieg’s growing Kith Treats business. The collaboration even expanded to the model looks, as Kith designed various watch faces for the Samsung Gear S3 Classic and the Gear S3 Pioneer to be sold at a yet-to-be-announced date.

“This is really the launch of a much larger scale collaboration with [Kith],” says Zach Overton, the vice president and general manager of Samsung 837. In addition to the watch faces and other activations in the space, seats at the runway show were lined with Samsung tablets that contained lookbooks of the collection. Each image in the lookbook was shot with a Samsung Galaxy S7. “We’re excited to continue to work with them moving forward.”

Another integral collaboration was with Bergdorf Goodman. “Ronnie and Kith stand squarely at the intersection of fashion and athletics, with his active-inspired sportswear perfectly representing the genre in menswear today,” says Bruce Pask, Bergdorf’s men’s fashion director. “Just as Bergdorf Goodman defined the luxury retail environment, Ronnie Fieg has very quickly established Kith as an innovative, groundbreaking retailer. Together, we are looking to create an unforgettable experience within our store, with timely collaborations, exclusive product, and expert custom service.” That all officially began Wednesday when the pair launched a Snarkitecture-designed shop-in-shop of Kith product in Bergdorf’s.

“Bergdorf Goodman represents luxury of all things for generation after generation, so the inspiration was really to create a collection that represented luxury in the way that I saw luxury when I first found out about Bergdorf’s, which was in the late ’80s when I went there with my grandmother and my mother,” says Fieg.

The collaboration consists of six styles that pull colors and fabrics from that era—hunter green and gold fonts, brushback terry and lightweight nylon. “Working with [Bergdorf’s] really upped our game.” But that’s not the only new retail development for Kith.

Kithland was divided into three themes: Beach, City, and Mountain. The show, then, featured everything from swim trunks and slides to ski masks and lined anoraks. But it also signaled what to expect retail-wise from Kith. While the city component is covered by the company’s three stores in New York City (two in Manhattan and one in Brooklyn), the beach and mountain components are still to come. A Miami store, announced in January, will cover the former. A previously unannounced Aspen store will pay homage to the latter. In addition to those brand-owned stores, Fieg says that five retail doors worldwide will soon carry Kith product.

But for Fieg and many fans of the brand, wearing Kith is about more than just the clothes. Thinking back to that Tommy Hilfiger rugby and other iconic pieces from his childhood, he says he hopes to imbue his own brand with a similar meaning.

“We’re all a part of our environment,” he explains. “So growing up was about what the Tommy flag meant to me, what the Polo horse meant to me, and the Nautica boat meant. Those logos represented more than a brand name; they represented where we were and what we like and individuality. And the individuality portion of retail—people being able to self express through apparel and footwear—is why I do what I do.”