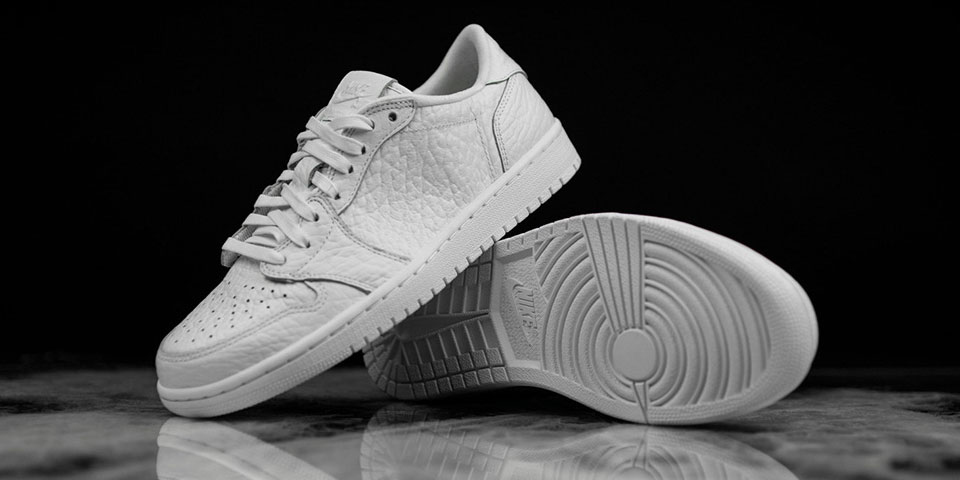 The 1 was the first shoe in the Air Jordan pantheon, created more than 30 years ago by designer Peter Moore. It launched the brand that would go on to become one of the most powerful footwear forces in the world. And while it would be a little too easy to say “the rest is history,” everything that’s happened since was built on that first shoe. When Air Jordan first introduced the swooshless low version of the Jordan 1, it wasn’t without controversy.

The original colorways that Michael played in are still sold to this day—and fetch remarkably high prices on the secondary market. The sneaker is a wearable legend. So why the controversy? Because in many ways the swooshless low shifted that story.

The original trio of Jordan 1 swooshless lows from a few months ago are long gone, but thanks to some photos that surfaced from Rock City Kicks, it looks like Jordan will be back with an all-white version soon. It’s a damn good-looking shoe. In fact, we’re even willing to come out and say that it might be the most wearable Jordan of all time.

The Coolest Sneakers Going on Sale This Week

This Giant Athletic Brand Is No Longer Invincible

Fat Joe’s Sneakers Were Stolen. Here’s Why You…

That’s because the elements that made the AJ1 low swooshless controversial are also what make it groundbreaking. To date, the 1 is the only Jordan sneaker with a swoosh built into the design, and in its original iteration as a technical basketball shoe, it had to offer some kind of ankle support. Basketball sneaker technology has come a long way since 1985, but the sneaker community still holds onto this history, and the original shape and meaning of the sneaker.

With the swooshless low, Jordan did away with the original branding and shape, entering the space of brands like Common Projects and Collegium. The original Jordan 1 sole is still there, along with a debossed “wings” logo on the heel, but the low-profile, swoosh-free silhouette and heavily textured leather make this different animal entirely.

Which makes sense: Minimal, upscale sneakers are now as at home in the office as a pair of cap toes, and there’s no reason that a brand like Air Jordan should be left out of that movement. This particular pair has a low-key look that’s perfect for style-conscious guys who don’t necessarily live and breathe sneakers, but still like to wear them. So even if you sneer at the folks lining up every Saturday for limited-edition drops, this is a shoe you can rock.